The JetStream Music Festival, taking place on May 6 at 5 p.m. CST, is an online celebration of music among 23 North American airports. The stream will take place on Facebook Live and will feature performances from musicians representing each city. Each musician will have a virtual tip jar to which viewers can contribute during the stream. 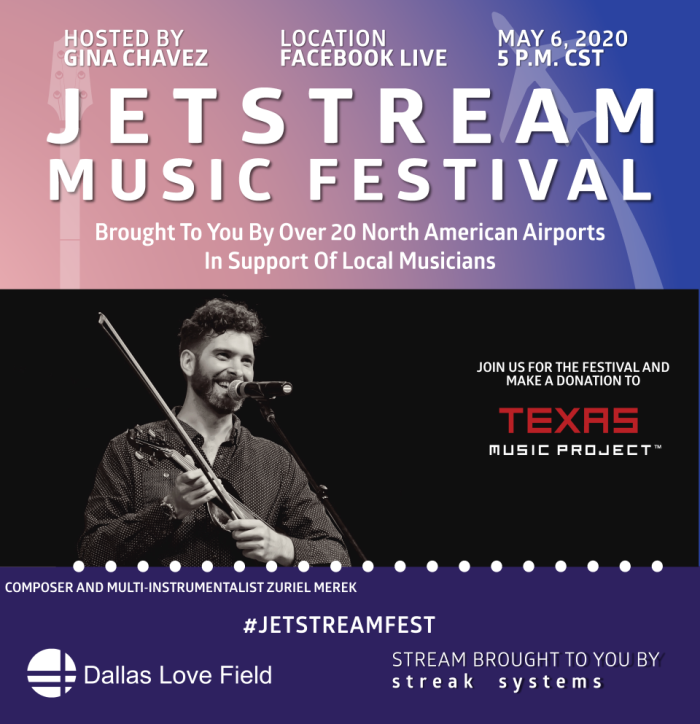 He seamlessly integrates a background in classical music with modern technologies and innovative techniques he developed while playing eclectic styles of music with many of the most outstanding bands in DFW’s music scene over the past decade.  As a solo artist, Zuriel specializes in live looping—the recording and playback of music in real time using a foot-operated looper pedal—with his freshly reimagined arrangements of contemporary songs

Austin-Bergstrom International Airport will host the livestream from Austin, Texas, “the Live Music Capital of the World.” Austin’s Latin pop songstress, Gina Chavez, will perform and host the event.

The full lineup for the event will be as follows:

The stream will also highlight community organizations and resources in each city.

For more information on the JetStream Music Festival, click here.

Dallas Love Field is the busiest medium-hub airport in the United States and the 2018 and 2019 recipient of the Airport Service Quality Award for North American airports that service 15-25 million passengers per year. In 2019, DAL served nearly 17 million passengers, the most in its history.